From Indieweb Monolith to Microservices

This post is part of a series where you can follow along as I redesign the blog and my IndieWeb Server.

Quick recap on my old architecture

A year ago I began a journey to really rethink how Indieweb functionality could work with a static website.

The hardest part to this process was the architecture, technically I need to be able to create an easy to support system, that is simple to deploy but flexible to allow me to do the interesting things I want to do with data.

I think (finally!) the major technical work is coming to an end so I wanted to share my thought process and learnings from what I have done. 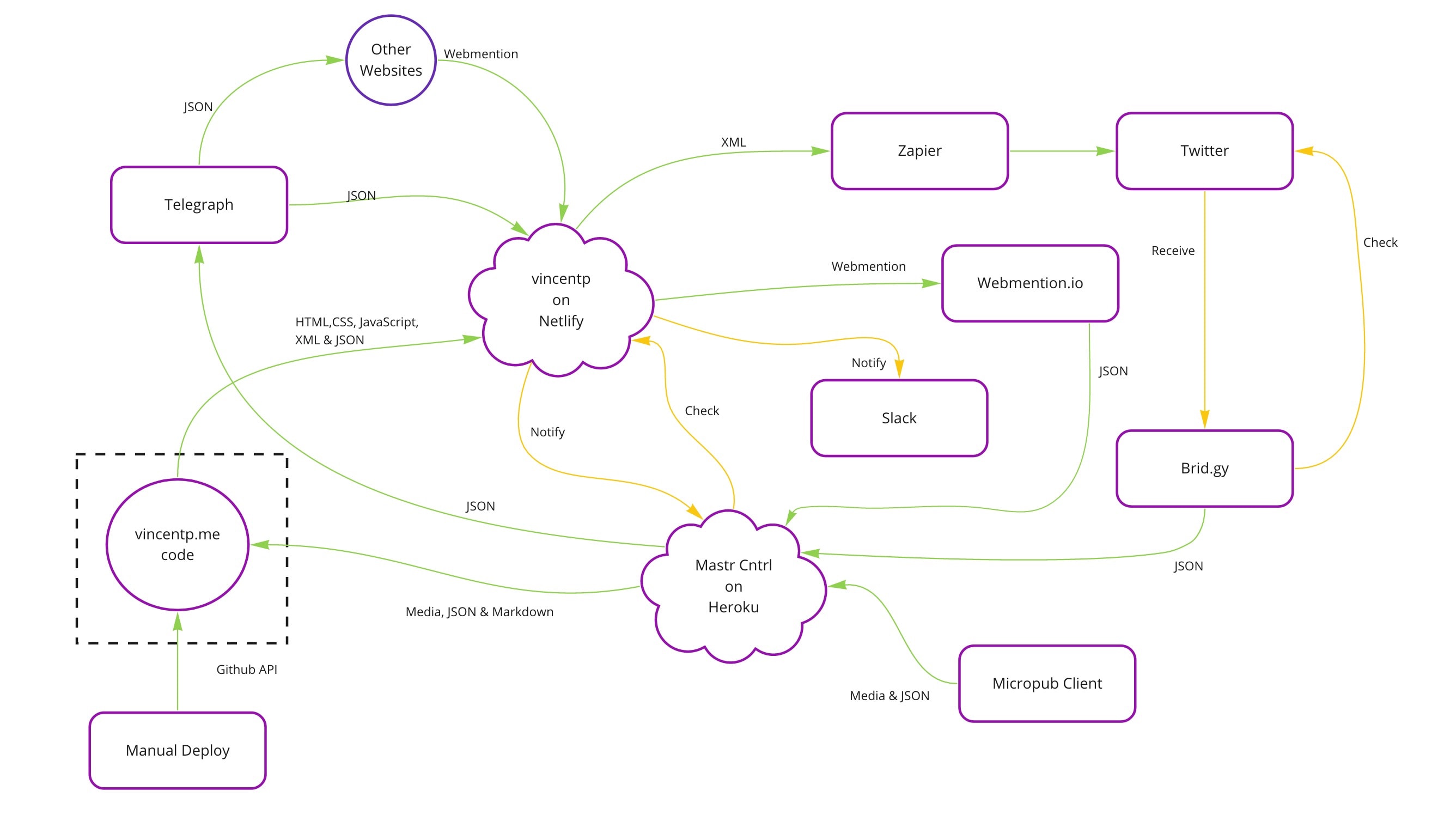 Originally I had my static site deploying to Netlify. This was supported by my IndieWeb server running on NodeJs on Heroku which:

I would syndicate content by using an XML feed that was periodically polled by Zapier and that would send content to various places.

It all worked but it was incredibly brittle. Problems ranged from:

Complexity was also a big driver, I don’t tinker in the code constantly, so even with good naming conventions and logic it can lead to accidentally missing unintended consequences around changing behaviour.

I have written in the past around the possibility of combining Lambda functions (or Netlify functions) in to my process. My theory was that on deploying the website, the functions would fire and do things like send a webmention or syndicate content. This was to reduce complexity by moving code from Mastr Cntrl and in to simple “single purpose” functions.

I’ll cut to the chase here. I managed to write a working Netlify function that would send webmentions and another that would syndicate content similar to Max Böck’s example here. It wasn’t a fun process at all however. The Netlify Dev CLI was incredibly buggy. I had to re-install Node multiple times, reauthentice and numerous other issues. I burned through hours and hours of free time I couldn’t really spare.

The buggy CLI aside (which I assume will be fixed at some point) I didn’t proceed with this direction for bigger reasons. Once I had the code working I took a step back and realised I had begun to build a dependancy in my build process. When I set out on the path to include Indieweb functionality I always took the approach, that it was the content I wanted to own, not the process.

I would encourage you to explore Netlify functions for yourself and decide if they (can or would) work for you. They didn’t meet my needs, but they might be exactly what you are looking for. Plenty of people are happy using them!

Once I decided that lambda functions were not right for me, I began to reassess the best way to reduce complexity, eventually deciding upon a Microservices approach.

I decided upon separating my concerns in to the following:

I could go further and have 2 separate services to send and recieve webmentions etc. My experience with Microservice arhcitecture has been that it pays to break them down and keep them simple within reason. You don’t want to break down services so small that you end up with a distributed system. The aim over a Microservice approach is to try to make it so that each service is not dependant on the other service working and does not possess knowledge of it’s internal working.

By cutting up the responsibilities this way I can have each service work independantly, and where sending content is concerned (syndication and webmentions) I can provide a feed on my static site, that is simply checked periodically triggered by a webhook for content to send.

A further benefit to this approach is that in the future I intend to try and bring in content from my other services such as Scrobbles from LastFm and more. I may add another service to manage this content and insert it in to my website. When I get to adding this the impact against the other services should be zero in both performance and complexity. Life is alot simpler.

This is my new architecture (you can click on the image for a bigger version).

At first glace it could seem a little overwhelming, but it is simpler than it first appears. Content outlined in dotted lines are the microservices. It is easiest to explain by stepping through a few basic examples.

How I Micropub a note and syndicate to Twitter

As you can see in this example Mastr-Cntrl handles the authentication, presents the syndication targets and recieves the content. It formats the content and POST’s it in to my repo. It has no knowledge over syndication whatsoever.

MC-Syndication doesn’t have any knowledge of the Micropub part of the process, the whole time it just waits for the webhook to be triggered periodically pings and then checks my JSON feed on vincentp.me, if it “sees” something to do, it takes the JSON feed content and POST’s it to the target and updates it’s last-sent datetime in Github.

As you can probably tell this pattern is very similar to the syndication example above. The MC-Webmention service has no understanding other than to check for a new item in the feed. When it finds one, take the content and POST it. For the webmention service this is much simpler since I use Telegraph to do the sending there is only 1 target.

The process can take a a few minutes to filter through, it works seamlessly and is relatively unchanged from my first implementation in the Monolith. The only difference now is that the Webmention Microservice is responsible instead of a non-related Service.

Mastr Cnrtl is now a single-use microservice recieving Micropub content, formatting and POSTing to my Github.

The Syndication service is completed with one integration (Twitter). Other servces are in the works such as syndicating bookmarks to Pinboard and it will be easy to extend to other services moving forward. The code is already in place on my website for the feed to except multiple syndication targets.

I feel really confident for the first time that I have a strong base to build upon for the redesign work, which should happen quicker and more incrementally than the wholesale architecture work that has taken much longer to get right.

The hardest part is done and I can’t wait to get started on that redesign. I have a wealth of ideas that I am excited to dig in to and share soon.